This is the history of Midland, Washington. Its evidence is given to us through historical maps, photographs, and documents that are factual and truthful in content, gathered from reliable sources such as the Library of Congress, Washington State Archives, Bureau of Land Management, Puyallup Tribe of Indians, and Pierce County Auditor.

In 1888, Ezra Meeker was one of the wealthiest men in the territory, making a fortune growing hops in the Puyallup Valley and selling those hops to breweries around the world.  Hops grown in the Puyallup Valley during that time were considered the finest anywhere and would command the highest prices at market. 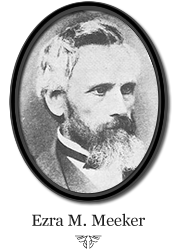 The company petitions the federal government asking that a right-of-way be granted through the reservation, [2] and on July 26, 1888, during the First Session of the Fiftieth Congress, an Act of Congress entitled “An Act to grant to the Puyallup Valley Railway Company a right of way through the Puyallup Indian Reservation in Washington Territory, and for other purposes” is passed with provisions.  “The consent of the Puyallup Indians to the right of way must first be obtained before any rights to the act can be accrued by the company.” [3]

On March 22, 1889, an investigation began after representatives of the Puyallup Valley Railway Company were caught bribing Indians with money for their votes to approve a right-of-way through the reservation.  Ezra Meeker told investigators that the Indians “misunderstood” what the money was for.

A representative of the company, George Dougherty, was asked where he got the money he gave to the Indians, and he answered, “From the company to give to them for their troubles.”  He admitted to giving 47 Indians money for their “troubles”, and promised them more money after they voted and the company was given the right-of-way.

Chief Tommy Lane testified that on several occasions he was offered “all the money he could ever ask for” by Mr. Dougherty if he would induce the Indians to approve the right-of-way.  On each occasion, Chief Tommy Lane refused. [4]

Meeker would make a statement that is published in the March 26, 1889 edition of the Seattle Post-Intelligencer  stating that a crime had been committed against the people of Puyallup.  He went as far to say that the agent from Bureau of Indian Affairs told him to give the Indians money. [5]

It was announced on March 29, 1889 that the Puyallup Indian Tribe had voted and will not grant the right of way to the Puyallup Valley Railway Company. [6]   Ezra Meeker would then file a lawsuit in Superior Court in an attempt to have the Indians land condemned as a right of way.  The case would be dismissed in July of 1891.