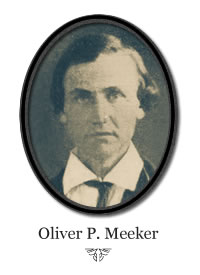 While on his way to Oregon, Oliver made a stop near Eddyville, Iowa the first week of April 1852, to visit his younger brother Ezra Meeker and wife Eliza Jane. The couple were living three miles outside of town on a forty-acre farm they began renting in January from a gentleman named John B. Gray. It was during this visit that Oliver persuaded Ezra and Eliza Jane to go to Oregon with him, and by the end of April they were on their way. [2][3][4]

Evidence for Oliver’s visit with Ezra the first week of April 1852 comes from a letter Ezra Meeker wrote to his daughter, Caddie Osborne, in 1908.  Ezra writes to his daughter that the decision to go to Oregon was made very suddenly when Oliver showed up. [4]

But Oliver came along on the way to Oregon and so we very suddenly concluded to go too, and a partnership was formed with William Buck (Oliver had already made his arrangements with others before leaving home) and in two weeks time we were on the road. −Ezra Meeker in a letter to his daughter, Caddie Osborne, May 17, 1908

Ezra and William Buck spent the last two weeks of April 1852 outfitting a wagon, acquiring two yoke of oxen and three cows for the journey across the Great Plaines. On April 14, 1852, the two happened upon a family struggling to get their wagon up the bank of the Des Moines River near Ezra’s farm.  The family were the McCauley children, from Mt. Pleasant, Iowa, Thomas, age 22, Eliza Ann, age 17, and Margaret McCauley, age 24. The children were heading west to California to be with their father. [2]

The McCauley’s and the Meeker party would travel across the Plaines together. Eliza McCauley kept a diary, which provides the primary contemporary record of the events of 1852 that bound these groups of travelers together. [2]

While struggling through the mud we were overtaken by two men from Eddyville, Meeker and Buck, who told us they intend to start in a few days for Oregon. We camped at the foot of a bluff about a mile from Eddyville. −Eliza McCauley, Diary Entry, April 14, 1852

This evening the men who overtook us in a mud hole near Eddyville came to our camp for milk. They are Mr. Buck and the two Meeker brothers, one of them having a wife and a six weeks old baby. They started today. −Eliza McCauley, Diary Entry, April 24, 1852

Of the trip through Iowa little remains to be said further than that the grass was thin and washy, the roads muddy and slippery, and the weather execrable, although May had been ushered in long before we reached the little Mormon town of Kanesville (now Council Bluffs), a few miles above the place where we were to cross the Missouri River. Here my brother Oliver joined us, having come from Indianapolis with old -time comrades and friends. Now, with the McCauley’s and Oliver’s party, we mustered a train of five wagons. −Ezra Meeker, Ox-team Days on the Oregon Trail, pp. 24, 25

The journey across the Plaines would take five months to complete. Along the way near present day Kearny, Nebraska, Oliver became seriously ill, likely from cholera, and the party halted for four days until Oliver recovered. The Ballard and McCauley wagon parties would not wait and continued on their way. The Meeker and Davenport wagon party would catch up with the McCauley’s one month later in present day western Wyoming. They would travel together until July 17, 1852 when they separated for the last time at Big Hill in present day eastern Idaho. It is there the McCauley’s along with Ezra Meeker’s friend, William Buck, took the trail to California and the Meeker and Davenport wagon party took the wagon road to Oregon. [2][6]

Oliver, Ezra and wife Eliza Jane, their infant son Marion, and Oliver’s friends from Indiana, the Davenport brothers, arrived in Oregon Territory on September 20, 1852. At The Dalles, Ezra bought passage on a riverboat for himself, his wife Eliza Jane, and their infant son Marion, taking them downriver to Portland and leaving their wagon behind. Oliver continued to Portland over land with the Davenport brothers, taking Ezra’s stock animals with him. [7][8]

The wagon was invaluable to the settler. It not only provided shelter and protection during their journey across the Plaines, it was packed full of worldly belongings they brought with them. Ezra taking a riverboat downriver to Portland, leaving his wagon at The Dalles, and Oliver taking only the stock animals with him suggests only one thing – Ezra’s wagon could not continue any further and was irreparable.

Oliver and Ezra met up in Portland on October 1, 1852. The following day, after dividing what little money was left ($3.75 – Ezra kept $2.00 and Oliver $1.75), Oliver took the trail out of Portland, heading north along the Columbia River, leaving Ezra and Eliza Jane behind. [9]