Along Delin street from Pacific avenue to Wright avenue, or so much thereof as is or may hereafter be dedicated to public use; G street from Wright avenue southward to the corporate limits of the city of Tacoma.

Radebaugh had an 80-acre homestead on Wapato Lake where he built a cottage and lived. He owned the Ledger, a weekly newspaper in Tacoma.  Each day he was carried to and from his office by horse, a distance of twelve miles.  At that time there were but two families living between his home and town, one was the Thomas Kenevan family and the other that of a war veteran, William H. Lang.

He interested Thomas F. Oakes, vice president of the Northern Pacific Railroad and George Browne in platting the Oakes Addition, which was the old Kenevan Farm. Later the Lang place was bought and the Hosmer Addition was made of it.   Browne, Oakes and Radebaugh put in $2,000 each for the street car line, the purpose of which was to open their real estate holdings. The outlook for disposing of them was so favorable that they had no difficulty in raising the remainder of the money necessary to build the line, buy cars and a steam dummy. 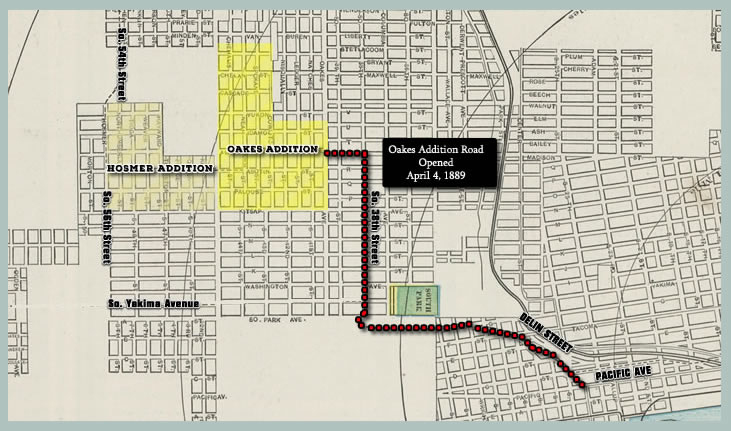 The Tacoma and Fern Hill Street Railroad Company was incorporated on May 24, 1888 by George Browne, Randolph F. Radebaugh, and Newman Kline, announced that it would build a street railway from the intersection of Pacific Avenue and Delin Street southerly to the Oakes Addition and then southeasterly toward Fern Hill.