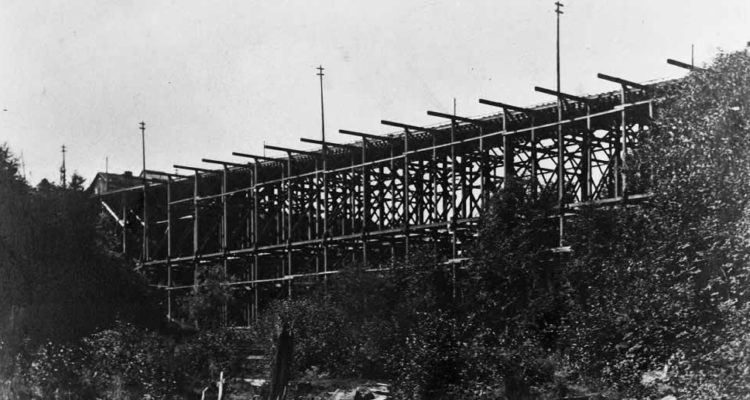 On Wednesday morning, July 4, 1900, 43 passengers are killed and many others are injured and maimed when an overcrowded trolley car carrying more than 100 passengers to downtown Tacoma for the Independence Day Parade, looses traction on the Delin Street grade, jumps the tracks on the “C” Street trestle, and plunges 100 feet into a ravine. The crash is heard for blocks and help arrives quickly, but the pile of twisted wreckage and the steep sides of the ravine make rescue difficult. After the accident is attended to, the huge Fourth of July celebration to usher in the new decade of 1900 continues. This is one of the worst and most appalling streetcar accidents in Washington state history.

Trolley car No. 116, owned by the Tacoma Railway and Power Company, left the South Tacoma at about 8:00 a.m. in charge of motorman F. L. Boehm and conductor J. D. Calhoun. It had been drizzling rain and the tracks were wet. The trolley had been switched from the Point Defiance Line to the South Tacoma Line, on which the accident occurred, as an extra car transporting people to the huge Independence Day parade in downtown Tacoma. It was estimated that 50,000 people would attend the big event, ushering in the new decade of 1900. The car was jammed to over capacity, with passengers crowded onto both front and rear platforms and standing on the running boards, clinging to the outside railings. Boehm made his last stop at 34th Street, picking up one last passenger, a small boy who climbed onto the cowcatcher, then proceeded down the long, steep Delin Street grade.

Near the bottom of the grade at S 26th Street, there was a dangerous left curve onto the “C” Street Trestle which crossed a 100-foot ravine before entering downtown Tacoma. The trestle had heavy timber guard rails a foot high on either side of the tracks to prevent cars from falling off. At the bottom of the ravine were several felled trees, which bridged a shallow stream about six feet wide and a foot deep. At the head of the ravine was a large pumping station that sent water into the city’s reservoir.

On the Delin Street grade, the trucks (wheels) began to slide down the tracks. Boehm set the brakes and used sand on the tracks with no effect. He released the brakes and reversed the motor, but the fuse blew, leaving the car without power. Boehm reset the brakes and applied more sand, but the car was beyond his control. As the trolley continued to gain speed, passengers on the front and rear platforms and standing running boards started leaping to the ground. It was traveling about 30 miles an hour when it arrived at the sharp curve just before the trestle. The streetcar jumped the tracks, cleared the trestle’s foot-high guard rail and plunged 100 feet to the bottom of the ravine, landing upside down. The tracks, for 300 feet up the hill, were strewn with dozens of injured passengers who had escaped the runaway car.

The Independence Day Parade was just forming on the streets when the accident happened. The crash was heard for blocks and help was quickly summoned. An ambulance was the first to arrive at the scene and, seeing the pile of twisted wreckage at the bottom of the steep of the ravine, called the Tacoma Police and Fire Departments for help. Doctors and nurses were brought from nearby hospitals to care for the casualties. While the police closed off the area and controlled the crowds, the fire department coordinated rescue efforts.

The coroner’s jury spent three days investigating the accident, examining dozens of witnesses including Tacoma Railway and Power Company officials and street railway experts brought from other cities to examine the tracks and equipment. Streetcar experts explained that a trolley’s speed entering that curve should be slower than 10 miles per hour and the brakes must be off when going around a bend, allowing the trucks to turn and follow the tracks. Brakes that are set hard hold the trucks rigid, causing the wheels to jump the tracks in a curve. Tragically, Boehm had the brakes set hard.

At 1:45 p.m. on Saturday, July 14, 1900, the coroner’s inquest was finally concluded and at 4:45 p.m., the jury returned their verdict, laying the blame on the Tacoma Railway and Power Company. The jury charged that motorman F. L. Boehm caused the accident by starting down a long and dangerous grade at an excessive high rate of speed, loosing control of the streetcar.

The jury found that the Tacoma Railway and Power Company was grossly and criminally careless and negligent in allowing an inexperienced motorman to operate the streetcar, for maintaining such a dangerous grade without any “safety appliances” and for poor track and equipment maintenance.

The verdict laid the foundation for scores of lawsuits against the Tacoma Railway and Power Company for injuries and wrongful deaths, almost forcing the company to declare bankruptcy. Finally, the company put more than $100,000 into a trust fund and informed the lawyers either to accept the money and distribute it among the claimants, or the railway would go into receivership. The lawyers accepted the settlement.

The final toll for the disaster was 43 dead and approximately 65 maimed and injured. Thirty-seven passengers were killed outright and six died in the hospital soon after the accident. Twenty-five of the victims — 11 dead and 14 injured — worked in the Northern Pacific Railroad’s car repair shop. Most of those killed in the accident were single men, children, and women.

This Was Not the First Accident

The DeLin Street grade and the dangerous curve had been the cause of other accidents. The first of these occurred about ten years before when two motor cars loaded with men collided, killing one man and injuring a dozen others. Two cars of green wood hauled by a dummy engine with Nelson Bedell in charge, ran away and went over the bridge. Other accidents had resulted in the death of two women.